This past weekend I was asked to be a judge for a cooking competition. So here is the format:
*Each Saturday Night at Tommy Rocker’s in Vegas, Food Trucks show up and provide late night snacks, for a fee of course, to the bar patrons AND to the service industry workers just getting off shift
*Two “Strip” Chefs come out and choose a truck to work from and then get a mystery basket (a la Chopped) and have to make a dish using ALL of the secret ingredients and anything they can find on the truck they chose.
*There is always a raffle for charity – this week was Three Square Food Bank
*There is no prize money or award…except bragging rights on the part of the Chef and the ever popular PBR Trophy.
*Each winning Chef is allowed to decorate the trophy is some fashion or other with something that represents them
*The PBR Trophy is going into its second season, so a new one was awarded this weekend. The first one had SO much adornment it threatened to topple over. 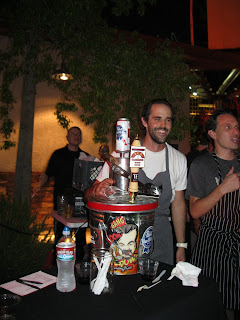 I have been attending these events for a year. Read previous blog here. They are late at night (Moment of Truth – I am a serious night owl, married to an early bird and Mom calls me a “Dirty Stay Out”). I always have a great time. The food from the trucks is always fun, the vibe is like a party of old friends getting together in someone’s back yard and I always run into people I know. I never go alone, Friend Lynn always goes with me, and Hubby joined us this time after a Disco Nap.

Frequently, I had half joked that no one ever asks me to be a judge. How hard could it be? Sit down and eat the food and decide which one you like better. I was thrilled and flattered when Jolene (AKA Sloppi Jo) asked me. I wasn’t at all nervous going into it, even when John questioned me in the car on the drive down, but as I sat at the bar-like table I started to second guess myself. Am I qualified to do this? What if I hurt someone’s feelings? What if I like (or dislike) both dishes equally, how do I decide? Sitting on an all female panel with Sue Mancini and Nicole Brisson (Exec Chef at Carnevino) I really started to doubt myself. Sue’s hubby does this for a living and Nicole is a culinary pro and dynamo and a past competitor for the PBR trophy herself. What the hell was I thinking? Holy Bat Shit Batman! Al hovered in the background like a nervous, soon to be Dad, Lynn and John snapped the pics for this blog and as everyone stared at us, I got more and more uptight. Al Mancini very sagely saying, “Welcome to my world” from behind me with food writer Jim Begley sitting behind me…yeah, no pressure at all!

Sue and I are “professional” eaters, but Nicole is a Chef. Would we see things the same or disagree? I needn’t have worried. I found myself in agreement with Sue and Nicole, even though we all said things differently. We were unanimous in our choice of winner. What was really cool for me was listening to Nicole say what I was thinking, but using completely different verbiage and thought processes. Sue and I have eaten together enough that we speak a similar language. I got it right! I was thinking like a CHEF! Hot DAMN!

And here are the pics:

Taking it all very seriously, even though it is s’posed to be all in good fun. Left to Right – Nicole Brisson, Sue Mancini and me. 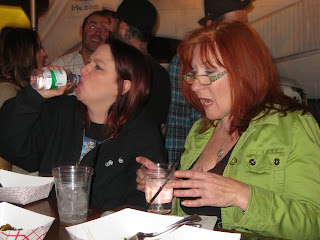 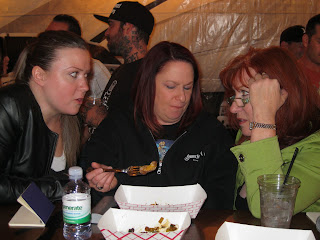 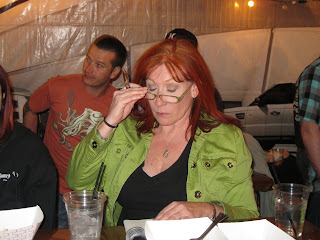 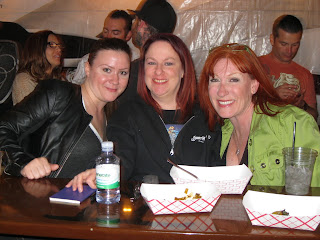 The food, with Jolene Manina’s hand and Jolene at the mic announcing the winner: 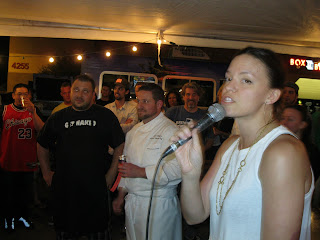 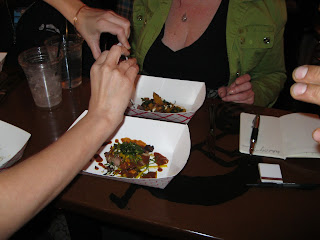 The Competitors:
On the Right – winner Chef Chris Palmeri of Naked City Pizza
On the Left – Chef Todd Williams of Caesar’s Palace 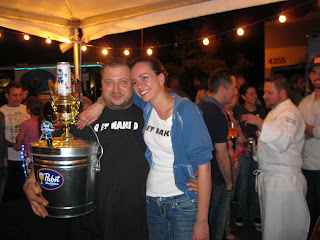 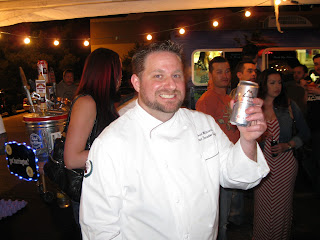 Now before the competition started, someone brought Balut to the table. Yeah, um, no! I said, “If it is one of the mystery ingredients, I WILL eat it, but I am NOT volunteering.” Al kept saying, “I’ll do it if you will.” After watching Cutthroat Culinary Christian Dolias spit it out? I don’t F-ing think so. If you don’t know what balut is, be sure to click the link above to learn more.

These are braver souls than I! Christian is the one in the black hat and T. 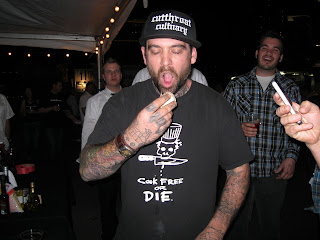 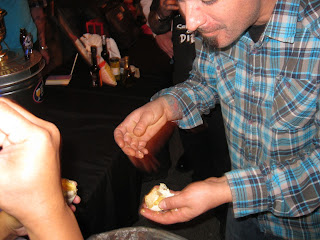 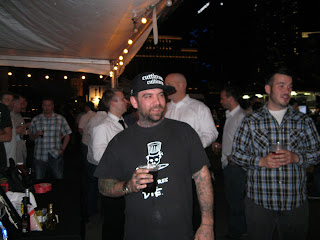 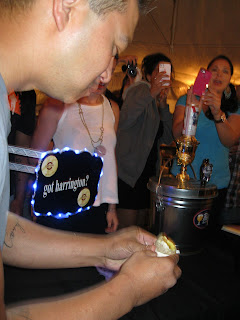 Next week – Ethical Eating. What does it mean to you?