I KNOW I am going to have poultry as a feast, so I tend to crave things that WON’T be served during that meal. The cravings began yesterday starting with sushi and ending with my desire for making a pot roast. (Moment of Truth – I actually like pot roast better after it has been in the fridge overnight and FOR YEARS I ate no one’s pot roast except Gram’s).

Now For The Roast

I think the most important thing to remember is there are no hard and fast rules when it comes to pot roast except this – sear first, then low and slow! If you just throw the meat in a pan with liquids and don’t take the time to build your flavor ladder all you will get is a boiled meat dinner and who the hell wants to eat that?! Searing the meat is the first step on the ladder; cooking the bite out of the onions adds a second rung of flavor; deglazing the pan with wine adds a third, and so on. Use whatever herbs, seasonings and hard veggies you like. I think basic mirepoix veggies (onions, celery and carrot) are essential, but you may think differently. So here is a basic primer for making a pot roast. You can use any cheap cut of beef to make one. Cheap cuts usually have a lot of connective tissue, which requires long, slow cooking to really make it tender. Cheaper cuts also tend to be fattier, helping to keep them moist during the cooking process. One of the reasons I like pot roast better the next day is because all of the fat rises to the top and you can lift it off because it solidifies.

This is a 7 bone chuck roast, seasoned with Salt & Pepper. 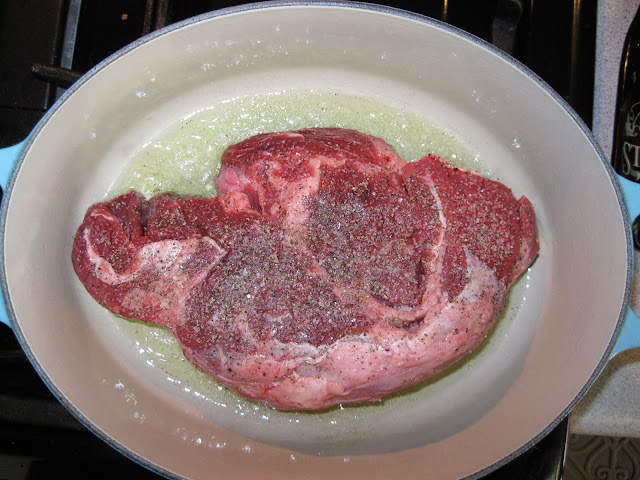 Pour oil into a Dutch oven or other roasting pan (with a lid) over med-high heat, and sear the meat, uncovered. I use a 3-1/2 qt Le Creuset cast iron oval Dutch oven. You will know to flip it when it easily releases from the pan when prodded. Sear it all over so it has a good crust. Remove from pan and set aside. 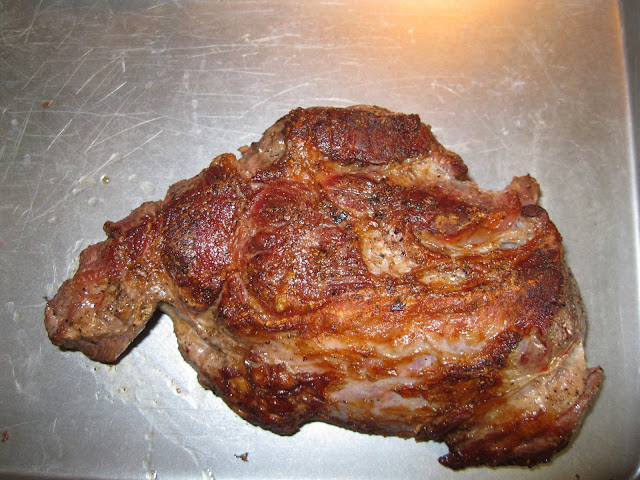 Reduce heat to medium. Take one good sized onion, sliced, and add to the pan with the oil and the drippings and fond* from the pan. Cook until slightly browned, but not fully caramelized. You will notice the fond lifting up and helping to color the onions – this is good. 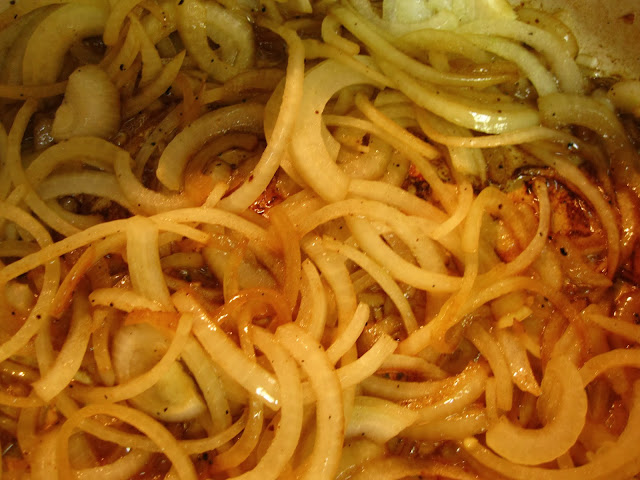 Add 3 carrots, 3 ribs of celery and one red bell pepper, cut into large chunks and several cloves of garlic, thinly sliced. You can also add parsnips if you like, but go easy because they have a strong, distinctive flavor. Cook until crisp tender. 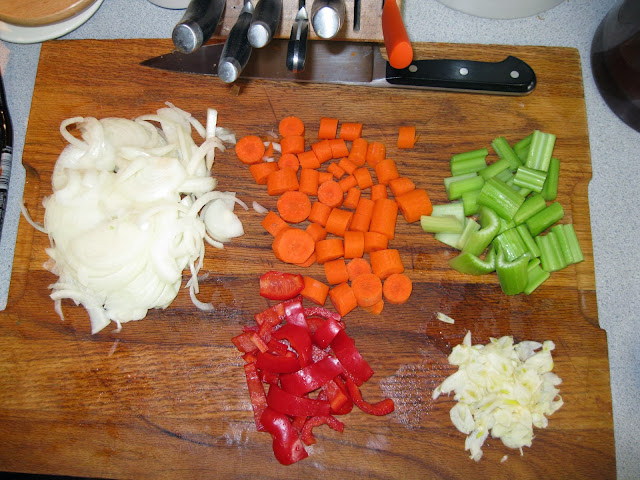 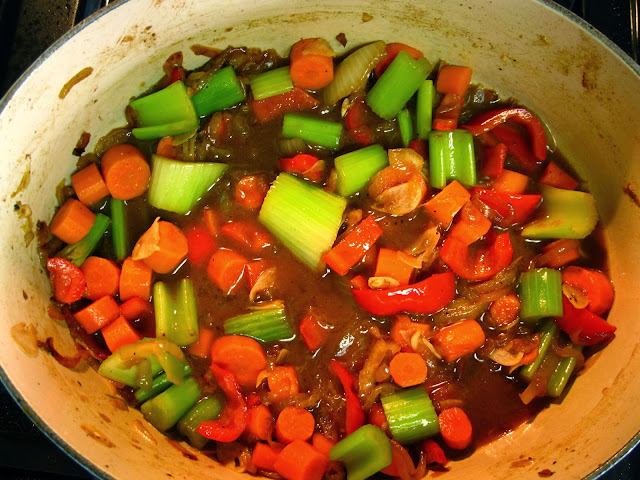 Add red wine – a cup or so (see above) – bring to a slow boil and cook until all the alcohol has burned off and the wine is mostly gone. Your veggies should look slightly stewed. If you don’t cook the wine down, all you will taste is wine and the flavors won’t have blended. Your kitchen should smell AWESOME right about now! Using the veggies as a bed, place the meat back into the pan. Add stock (I am using homemade chicken stock, because I have it, but of course beef would be the obvious choice) to partially cover the meat (the juices in the pan should come half way up the height of the meat) and bring to a simmer. Now is the time to add extra seasonings. I used oregano, marjoram, bay leaf, springs of thyme and candy cap mushrooms. Because I am adding the dried ‘shrooms to liquid, I didn’t soak them. All their flavor concentration will go right into the sauce in the pan as they reconstitute. If this was a quick cooking dish, you’d soak the ‘shrooms and use the liquid as a flavor rung in the sauce. 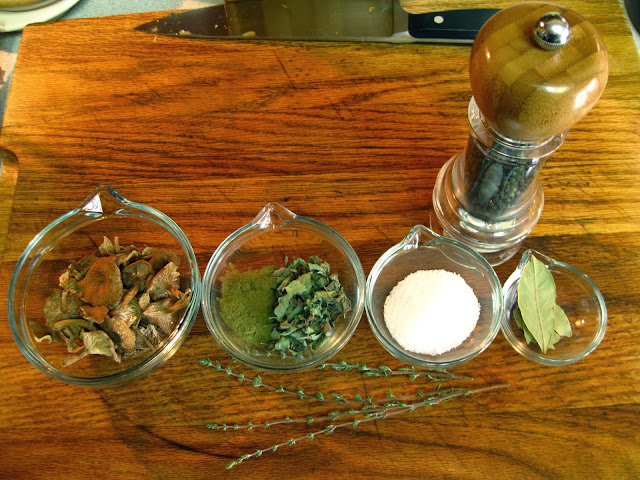 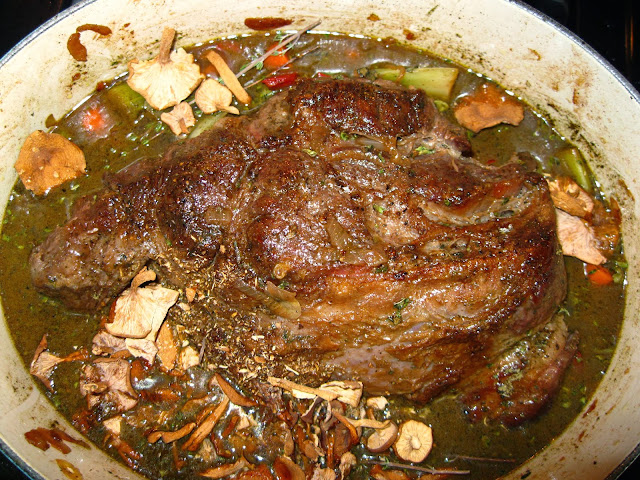 Cover and place in a 300 oven until tender. This will depend not only on the size of your cut of meat, but also on the actual cut. Start checking it at 4 hours.

Sorry you won’t be seeing the finished product, but you all know what a pot roast looks like. I serve mine with herbed polenta – another whole story – but do whatever makes you comfortable, this IS supposed to be comfort food after all!

*fond = the lovely brown bits on the bottom of the pan when you cook meat. ALWAYS keep it unless the recipe says to remove it. It is the basis for fantastic sauces and gravies.